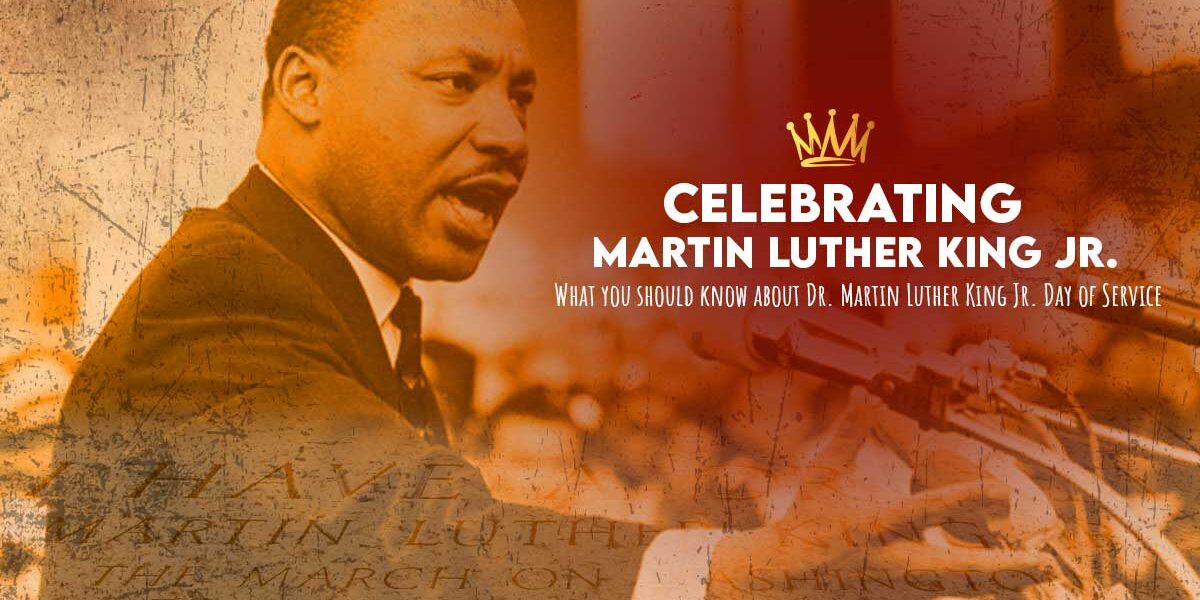 What you should know about Dr. Martin Luther King Jr. Day of Service

Today marks the 27th anniversary of the celebration of Dr. Martin Luther King Jr. holiday. This day was established to honor the life and legacy of Dr. King, and to encourage all Americans to volunteer to improve their communities.

Dr. Martin Luther King, Jr. was a Baptist minister who advocated the use of nonviolent means to end racial segregation, he first came to national prominence during a bus boycott by African Americans in Montgomery, Alabama, in 1955. He founded the Southern Christian Leadership Conference in 1957 and led the 1963 March on Washington. The most influential of African American civil rights leaders during the 1960s, he was instrumental in the passage of the Civil Rights Act of 1964, which outlawed discrimination in public accommodations, facilities, and employment, and the Voting Rights Act of 1965. King was awarded the Nobel Prize for Peace in 1964.

Dr. King’s “I Have a Dream” speech from the 1963 March on Washington is one of his most celebrated. In it, Dr. King envisioned a world with equal justice for all people under the law. He went on to earn a Nobel Peace Prize and see the passing of the Civil Rights Act and the Voting Rights Act. Towards the end of his life, Dr. King’s advocacy emphasized the importance of economic justice in the fight for equality and racial liberation. He was assassinated on April 4, 1968 in Memphis, where he was supporting Memphis sanitation workers in their strike for union recognition, better safety standards, and liveable wages.

MLK Day was not always a national holiday. It was a hard long fight between Dr. King supporters, and those who felt threaten and didn’t understand his advocacy. The holiday talks came about after Dr. King’s assassination in 1968. It wasn’t until 1983 that Congress passed legislation making Dr. King’s birthday a federal holiday. This was thanks in large part to the work of Coretta Scott King and the King Center and Rep. John Coyers and the Congressional Black Caucus.

The battle was not over, MLK day was recognized at the federal level but now the fight for the state level arose. This battle also included a stand-off between the NFL and the state of Arizona over their refusal to adopt the holiday. Southern states showed the most resistance, and some even tried combining MLK Day with celebrations for Confederate leaders. In 2000, all 50 states officially adopted MLK Day — 32 years after it was first proposed.

“Today, the King holiday serves multiple purposes: It honors the total legacy of King; focuses on the issue of civil rights; highlights the use of nonviolence to promote change; and calls people into public service.”

MLK Day matters and it honors the life and legacy of Dr. King, and it encourages us all to volunteer to improve our communities in our own ways. To this day, some of the issues such as racial justice, economic equality, affordable housing, labor rights, etc. that Dr. King fought for are issues we’re still fighting for today!

This is an ongoing fight and today is the day to reflect on the work and influence Dr. King had and take responsibility for the work we still have left to do.

How can you celebrate MLK Day?

Did you know that According to the Corporation for National and Community Service (CNCS), MLK Day is the only federal holiday designated as a national day of service, and Americans are encouraged to spend this day volunteering to improve their communities.

Here are some ways you can celebrate

The Indianapolis Zoo will once again host a MLK Day Celebration that includes both free admission with a donation and parking.

The Indiana State Museum will also offer free admission with donation on MLK Day again this year. In lieu of canned goods and non-perishable food items, visitors are encouraged to make monetary donations of any amount via Dip Jars to Gleaners Food Bank

You can visit the park in Indianapolis bearing Dr. King’s name. See the historic statue celebrating the contributions of MLK and Robert F. Kennedy.

Advanced tickets are recommended but not required for free admission to this year’s Indiana Historical Society MLK Day Celebration – January 17 – from 10 am to 5 pm.

Stop by Visit Indy for more celebration ideas and details.